The first fire company on campus was a small group of Holy Cross Brothers whose main duties were listed in 1846 as “to procure buckets, axes and other tools during a fire.” Their “fire engine” was a piece of pumping equipment that was located in a shed adjacent to the campus’ dog kennel. As the University was much smaller at that time, this met the needs of the institution.

By 1871, the growth of the University prompted the formation of a fire brigade which was staffed by the Brothers and students. They utilized a hand drawn Babcock chemical cart and trained once a month to hone their skills.

The rudimentary nature of the fire brigade was highlighted during the devastating fire of 1879, which destroyed the Main Building and nearly closed the University permanently. As it took 45 minutes for a volunteer horse-drawn steam fire engine from nearby South Bend to arrive, the local Provincial Council of the Congregation of Holy Cross directed Father John Zahm to form a three company fire department staffed by Brothers and students on November 21, 1879. They were equipped with the Babcock cart and several hose carts that were stationed throughout campus.

In 1896, a central firehouse was built with two bays to hold the hose carts and a tower was later added to hang wet hose. By 1900, the Notre Dame Scholastic noted that the University had the “best fire protection in America,” and “could deliver over 2000 gallons of water per minute within 5 minutes of the alarm.”

Brother Borromeo Malley became fire chief in 1939, inheriting an outdated and neglected organization. During his 50-year tenure, NDFD firefighters constructed their first motorized fire truck (a 55 foot ladder truck in 1940) then purchased a fire engine and constructed the current firehouse in 1945. The eight Brothers assigned to live in the firehouse saw themselves primarily as firefighters despite fulfilling other positions throughout the University. From 1961 to 1990, student firefighters also lived in the firehouse and responded to calls in exchange for room and board. During fires, they were supplemented by volunteer firefighters drawn from the University’s power plant staff.

After another large fire at Saint Edward’s Hall in 1980, the first career firefighters were hired to work 24 hour shifts. This marked the beginning of the modern NDFD. At first, only one full time firefighter was scheduled per shift, but by 1996 the number had increased to four. The era of religious and student firefighters ended when the last two resident student firefighters graduated in 1991 and when Brother Francis Gorch moved out of the firehouse in 2002. 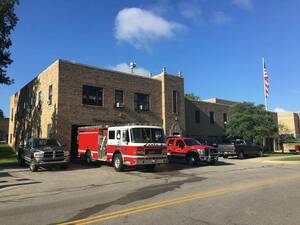 The modern day Notre Dame Fire Department has 16 full time Firefighters responding to over over 2,000 incidents a year. The Administrative staff along with two fire protection technicians work weekdays. Thirty part-time Firefighters are used for shift vacancies, football games and other special events.

As the oldest university fire department in the United States, NDFD is also the only career Fire Department at a private educational institution. NDFD’s primary responsibility is to provide fire suppression, rescue and emergency medical services for the Notre Dame Community (which consists of the University of Notre Dame, St. Mary’s College, Holy Cross College, Holy Cross Village and other adjacent properties owned by the Sisters of the Holy Cross and the Indiana and Midwest Provinces of the Congregation of Holy Cross) and assisting neighboring fire departments.

Born out of necessity, NDFD is more than an emergency response agency. We are partners with the Notre Dame Community, committed to promptly and professionally answering requests for service and endeavoring to reduce  the threat of fire through aggressive prevention efforts.departments in the areas surrounding Notre Dame. NDFD also provides fire safety education, fire code and OHSA safety inspections, fire protection system repair and maintenance as well as participating in the design review process for University construction projects.